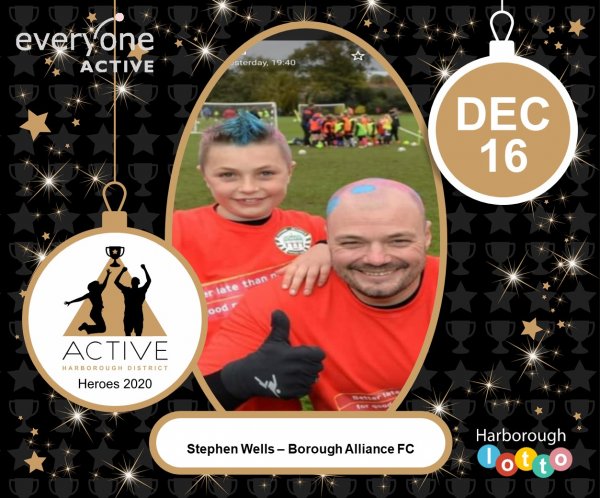 Stephen is a parent that has gone above and beyond in his volunteer role at a local football club:

"Steve's role at work deals with children and safeguarding. Steve is also a Coach for Borough Alliance Football Club, based at Symington's recreation Ground in Market Harborough. Steve's passion for wellbeing has been brought to Borough Alliance where he has driven the cause of Mental Health, promoting it to players and parents alike. Steve has also taken on the voluntary role of Special Educational Needs Coach at the Club. He has co-ordinated several events promoting mental health; during Mental Health Awareness week, Steve organised a socially distanced event with a board marked out as a football pitch, calling it the "Pitch of Positivity", where we asked players, parents and volunteers to write positive messages and pin them to the board. These events have assisted in forging strong relationships with a local charity HAB (Harborough Anti Bullying) Steve is passionate about mental health; he has seen the issues arising from the lockdown and asking people "are you ok?" doesn't go far enough. During both periods of lockdown Steve has kept in touch with his football team, posting messages and drills on the parent's group, for the team to practise and keep in touch"