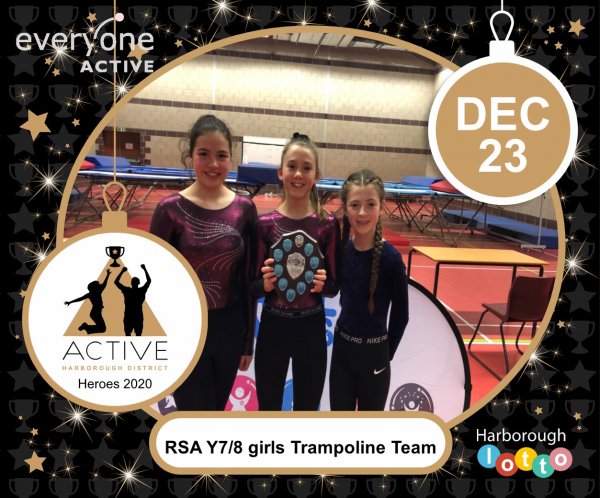 These ladies have been on quite the journey! Best summarised in their nomination:

"The RSA Y7/8 girls trampoline team members have shown great commitment to the weekly after-school club and have made superb progression this year. The A team members consist of Daisy Verbruggen, Kayleigh Cook, Olivia Tuck, Martha Cook, Izzy Baldock, Freya Spencer, and Carlie Coleman. They have been largely led by older role
models: Amy Lyon RSA sports leader and KS4 trampoline team captain; and Maisie Marsden who is our high performer on trampoline. The journey began in December 2018 most of the girls had 3 months of training and they finished 6 out of 7 teams at
the East Midlands Schools Finals. The girls really supported each other on the day and it was just a case of a few mistakes from inexperience & nerves. Freya Spencer made it to 5th position out of 50 girls which was a great achievement for her first time. We knew we could do better next year. The team reached the Leicestershire County
finals and finished in fifth out of six team in 2019.

September 2019 the goal was clear. Better position in the East Midlands, and County schools' champions! Daisy Verbruggen had joined RSA from Great Bowden over the summer, she was a welcome addition to the team. The girls competed at Hinckley Leisure Centre for the East Midlands Schools - December 2019. Eight teams took part.
RSA finished in Fourth on 150.95 just 3.50 points off the winners Derby. A huge improvement from 2018. Two of the girls gambled by adding recently learned somersaults to their routines. Whilst it did not end up with a podium position,
it was 100% routine completion from all members of the team. Daisy Verbruggen reached 8th position out of 46 girls competing too which was a good confidence builder for the team.

The team progressed from the area round hosted by RSA (Feb 2020) to the County Finals once again in March 2020. This time Daisy Verbruggen got the highest individual score in the whole competition. Backed up by top performances from Martha Cook, Kayleigh Cook, and Olivia Tuck. Five teams competed in the finals. The top two was split by 0.10 marks with Catmose on 48.40 & Robert Smyth finally on top 48.50! They are your 2020 county schools' champions."